Startup of a new radiant cooling system in Kalispell Montana. 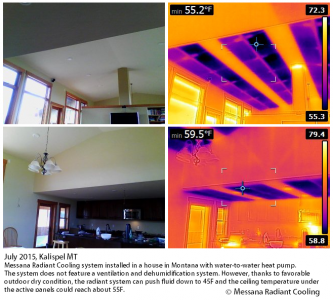 A new Messana Radiant Cooling system installed in a house in Montana (in Kalispell).
The hydronic radiant ceiling is powered by a ClimateMaster geothermal water-to-water heat pump. The radiant system doesn’t feature any mechanical ventilation and dehumidification. However, thanks to favorable outdoor dry conditions, the heat pump can push fluid through the Ray Magic radiant ceiling panels at temperature as low as 45F and the ceiling temperatures, under the active panels, could reach about 55F on the surface. Being the dew-point in the house lower than 50F, there are good margins from condensations. See thermal images of the kitchen and living room (picture on the left).
The house is efficiently cooled and maintained perfectly comfortable.

The pictures were taken with a thermal camera Flir E8 with a 320×240 resolution.
The color of the thermal images fades from purple to yellow based on the surface temperatures (from cold to hot). The Ray Magic radiant drywall panels are clearly visible in purple.
The IR camera also takes digital visual pictures and allows for side by side comparison (visual vs thermal).

The system is controlled by Control Magic, the Messana proprietary radiant cooling control platform.
The control system adjusts the temperature of the radiant fluid based on the dew-point evaluated in each conditioned room. The controls also operate a water-to-water heat pump by measuring the temperature of a buffer tank (Boiler Buddy 30 Gal, model BB30) that acts also as hydronic separator.
The picture below shows a screenshot taken on July 2015, of the Messana Radiant cooling control dashboard. 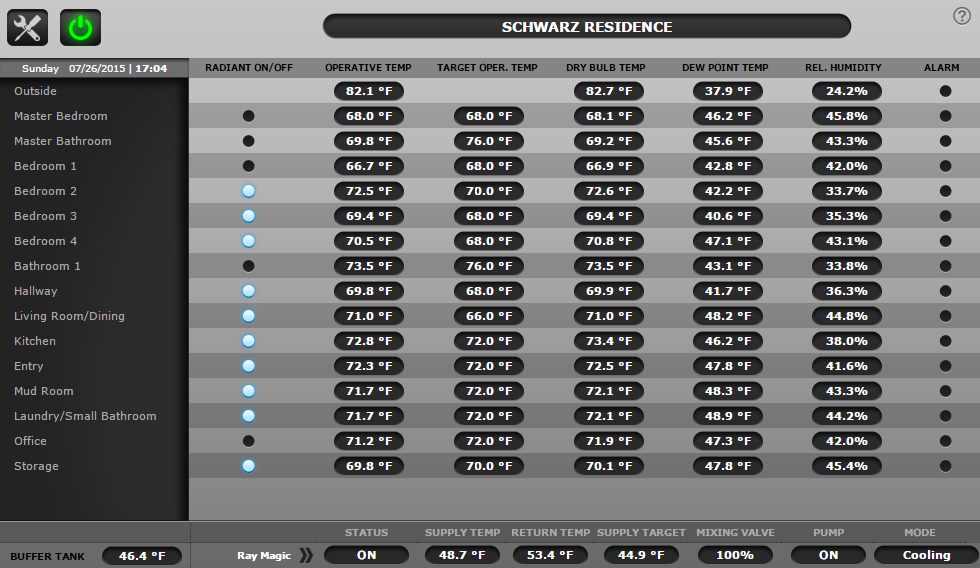 This is the first radiant cooling system in Kalispell, and most likely the first one in Montana.
This radiant ceiling system was design by Messana Radiant Cooling and installed by the homeowner, Molly Schwarz and her 3 young sons.
They have been self building their own home over the past two years.

This site uses Akismet to reduce spam. Learn how your comment data is processed.

This website uses cookies to improve your experience while you navigate through the website. Out of these cookies, the cookies that are categorized as necessary are stored on your browser as they are essential for the working of basic functionalities of the website. We also use third-party cookies that help us analyze and understand how you use this website. These cookies will be stored in your browser only with your consent. You also have the option to opt-out of these cookies. But opting out of some of these cookies may have an effect on your browsing experience.
Necessary Always Enabled
Necessary cookies are absolutely essential for the website to function properly. This category only includes cookies that ensures basic functionalities and security features of the website. These cookies do not store any personal information.
Non-necessary
Any cookies that may not be particularly necessary for the website to function and is used specifically to collect user personal data via analytics, ads, other embedded contents are termed as non-necessary cookies. It is mandatory to procure user consent prior to running these cookies on your website.
SAVE & ACCEPT
Messana API Key Request Form
Contact Support
Subscribe to Messana Radiant Cooling Newsletter

Your Information will never be shared with any third party.

Send this to a friend
Go to Top